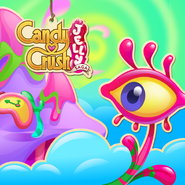 We’ve got 20 new levels for you! Match and swipe your way through our new Episode, Tasty Tricks!