Rainbow Party was one of the events in Candy Crush Jelly Saga. It was only available on the mobile version.

This was an exclusive event to celebrate the Pride month in United States in June 2021.

In this event, the player will create candy fish by playing a level set up by the game. Candy fish will be collected after the player completes the level. Each candy fish they created will be counted as 1.

This event will choose 10 best players to enter your team.

There are three stages of rewards, it means the player needs to create an amount of candy fish required in this event.

After this event ends, players who caught at least 1 fish will get rewards. But if the event ended after players access to, they won't give any rewards.

However, if the team catches all candy fish required in this event, each player of the team (expect players who didn't catch any fish) will get rewards and the event will immediately end.

For the player who doesn't catch any fish yet, a banner "Catch 1 fish to get rewards" will appear. If they don't catch more fish after the event ends, they won't get any rewards. This was added with the aim to make fair to the player who always caught fish during the event. 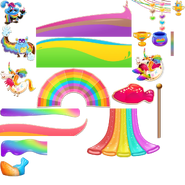