Race it! is one of the features in Candy Crush Jelly Saga that is available on mobile devices and Facebook.

It's time to race! Reach and pass level x before the other competitors!

When you enter a new episode, you will start a new race with 4 other competitors. The finish line is the last level of an episode. To get reward, you must be 1 in 3 first players to reach and complete the last level required.

Race it on the map

Race it in other events 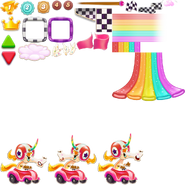