Lollipop Labyrinth is the 63rd episode of Candy Crush Jelly Saga and the third and final episode in World 21. It contains levels 1241 - 1260. This episode was released on December 27, 2017 on web. 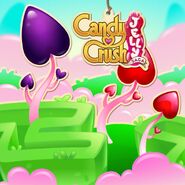