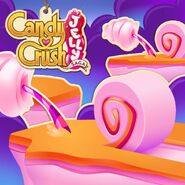 New levels OUT NOW! Explore the tasty realm of the Furios Floss Fields!
What are you waiting for? The Jelly Queen is expecting you... ;)