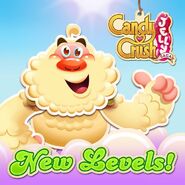 It's a thumbs up from the Yeti which must mean he's approved the new levels! Who's playing them? 😃