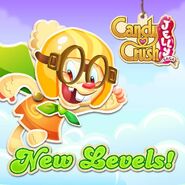 It's your favorite day of the week. New levels out now!