Level 1320
Add a photo to this gallery 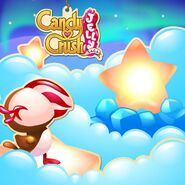 Stargazing or starglazing..? 🤔 ✨ Find out in the new levels! Get them now!
Add a photo to this gallery

Retrieved from "https://candycrushjelly.fandom.com/wiki/Episode_67?oldid=46949"
Community content is available under CC-BY-SA unless otherwise noted.