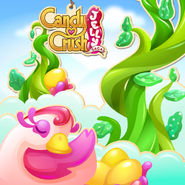 📺 News flash: 15 new levels out EVERY WEEK, starting today! What are you waiting for?