Daily Bonus is one of the features in Candy Crush Jelly Saga that is available on the web and mobile versions. It appears after the player opens the game.

This feature will be unlocked at level 6.

From October 18, 2017, some players find Daily Bonus is not working anymore, or even this feature does appear but no reward is given to the player. King notified all the players that they are updating a new version for this feature.

This is a feature on both Facebook and mobile devices. There is no button to access, except the player reloads the page. This feature only appears when the previous day is over and the next day starts or the player restarts the game. This feature is only suitable for the player who is free. To get the reward, come back every day, wait for the tree is watered and the player must be always here to get more sweet treats.

If the player misses a day, they will have 2 selections:

After the player watered the tree in 7 days, they will restart to day 1 to continue.

During watering soda into the tree, you can skip this by clicking the mouse anywhere on the screen.

After November 15, 2017, now the player can get a reward directly without clicking any button. The feature will appear and disappear automatically.

Note: The prize will be reduplicated exactly the one in the previous days.

Back to day 1 (With option to revive with goldbars)

It's time to start my growing cycle again!

Thanks! Give me more Soda tomorrow to get a tasty reward!

Thanks! Give me more Soda tomorrow to get a tasty reward!

Daily Bonus the next days

Return tomorrow for the next reward!

Return every day for more rewards!

Return tomorrow for the next reward!

Return every day for more rewards! 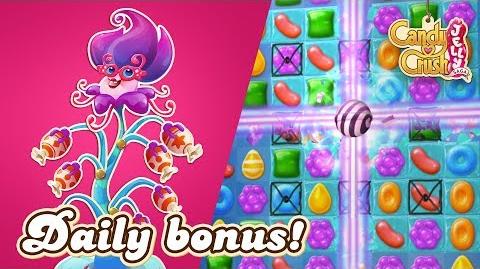