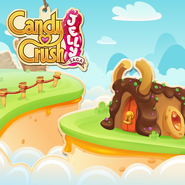 New Jellylicious levels - OUT NOW! Climb your way up to the Cookie Crust Cliffs!