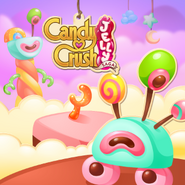 It’s almost the weekend, which means… new levels are out! Our new episode Chewy Trinkets awaits 😃 🍬