A booster (sometimes known as a Power-up) is an item in Candy Crush Jelly Saga that can be used to simplify gameplay. They do this in various forms. Some boosters are activated via the screen before the game starts, while others can be activated during gameplay.

There are various boosters in the game and all of them have different properties. Boosters come with a certain number of uses. Once you use the booster, one use is consumed.

This feature is first released on April 29 2020, you can get a free booster before playing by watching ad video, with a maximum of 5 times.

You will be given one of 3 boosters: Color Bomb, Coloring Candy or Double Delish Fish.

If you notice, boosters always pop up continuously. See carefully before clicking the button. Note that if there is an unlimited booster, the remaining ones will be chosen randomly.

A row of Lollipop Hammers 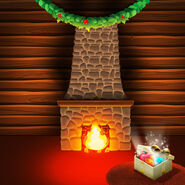